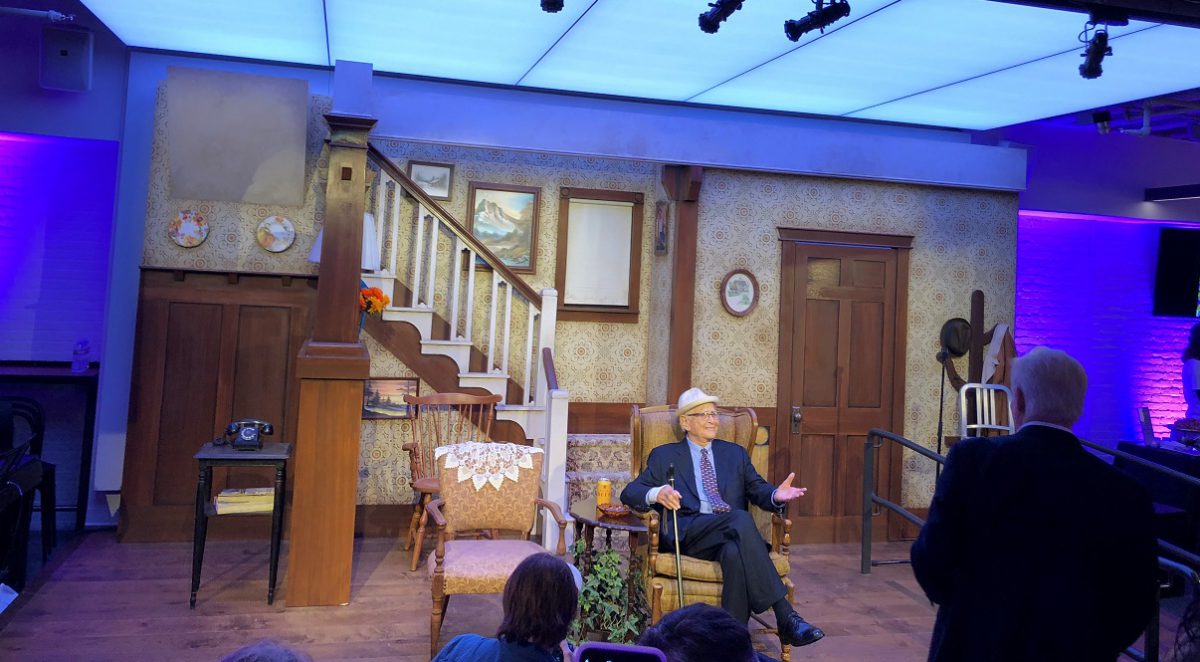 On Thursday, October 4, 2018, Boston’s luminaries gathered in the Boylston Place Walkway, an on-campus social hub for students of Emerson College, to honor an icon. Thursday’s occasion marked the unveiling of a life-size bronze sculpture as a tribute to the incomparable Norman Lear, an alumnus of Emerson College. The sculpture was commissioned by Kevin Bright, a fellow alum of Emerson College, best known for his executive producer and writer roles for the show Friends. Bright was joined in “Emerson Alley” by fellow comedian Eddie Brill. The entertaining duo shared with Mr. Lear a series of pre-recorded videos with contributions from a network of famous names including Steven Wright, Jay Leno, Dennis Leary, Henry Winkler, Matt Mutchnick (of Will and Grace fame), Andrea Martin, and Tina Fey, all with ties to Emerson College or the Boston entertainment community. The collection of “thank yous” and anecdotes served as a testament to Mr. Lear’s legacy. 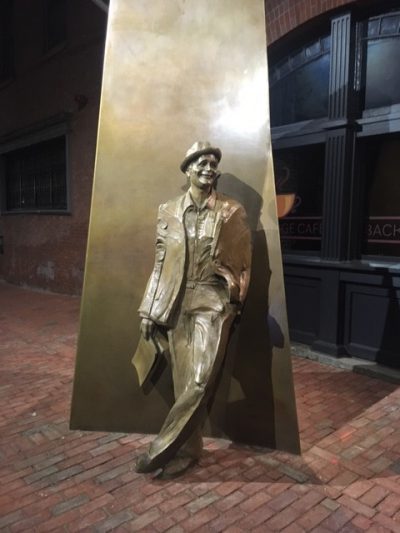 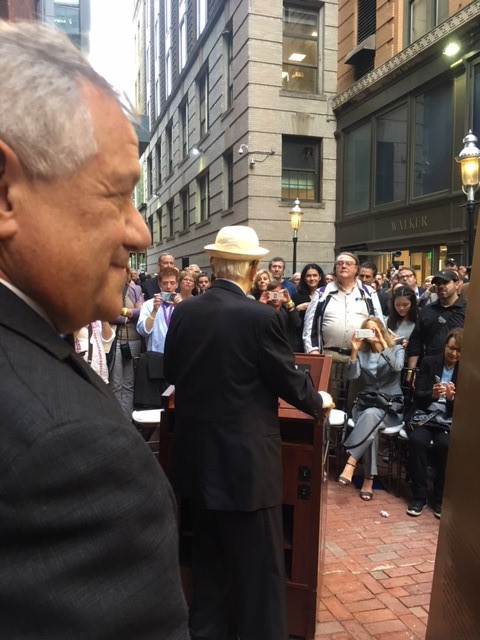 Well-renowned for his contributions to television, film, and really just the zeitgeist of American society, Lear brought famous characters such Archie and Edith Bunker, and George and Louise Jefferson, to the screen through his hit show All in the Family and countless spin-offs. Throughout the 1970s-80s, Lear produced truly groundbreaking television – television that would not be allowed on the air today because of its controversial nature – that showed audiences a “slice” of American life at the time. All in the Family confronted racism, social injustice, and countless clashing ideologies, head-on, through the well-meaning, but often ignorant, Archie Bunker.

VDA was grateful to be included in this tribute to Norman Lear, an icon that gave so much to American culture, for so many years. This process all began with a conversation in June 2018. Our associates at AE Events approached us about working on this project, and thus began a dynamic, collaborative effort between AE and VDA, in which we were able to provide a memorable experience for attendees and the paramount honoree. Contributing to this event was particularly important for VDA, given that it benefitted the Emerson College community at large; VDA’s Founder and Principal Designer, David Breen, is not only an Emerson alum, but currently sits on the Board of Directors, and served as the past President of the Alumni Association. VDA has a longstanding relationship of working with Emerson College, which even further contributed to the great synergy between VDA and AE Events on this project.

The ICONIC All in the Family Stage Set… 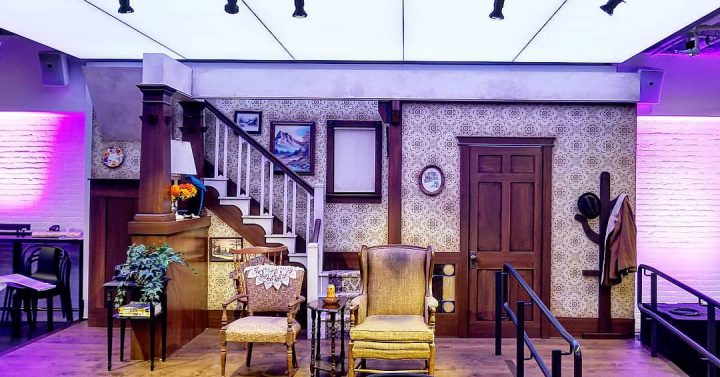 The key design piece featured at the event was a recreation of the All in the Family stage set. Our design team spent hours poring over still pictures and video footage of the television show to identify the iconic pieces, props, wood trim, and molding, to ensure no detail went unnoticed. VDA’s process was simple – to replicate the set design as exactly as we could. From the stained-glass windows, to hand drafting the iconic 70s wallpaper, and making sure to get Archie’s chair and the label on his beer can just right, there was a great collaboration of skills across all departments. VDA’s involvement in the unveiling event truly evolved into a “passion project” for our team. A lot of the folks in our shop are either Emerson grads that took personal pride in working on this event for their alma mater, or they simply took great excitement and joy in being able to do what they were trained to do: build a traditionally theatrical stage set.

“Most of our full-time shop folks came from a theatre background, so this was in our roots. It was great to get back to that, to do something that’s in our wheelhouse. It’s exciting to be able to put in the quality of work for someone like Mr. Lear that would fully appreciate it and notice it,” stated Helen McCarthy, VDA’s Paint Shop Manager. 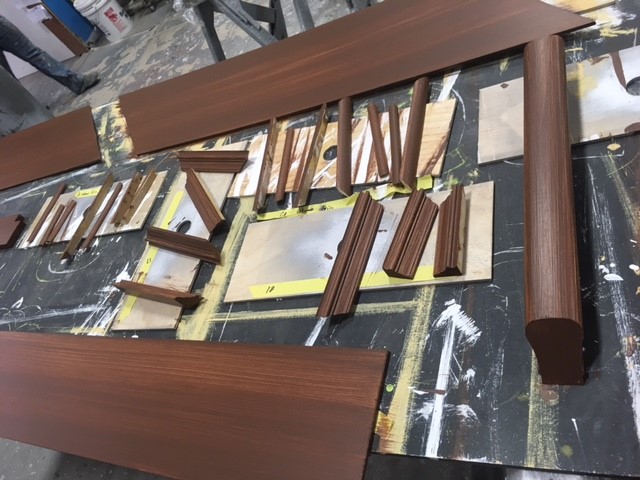 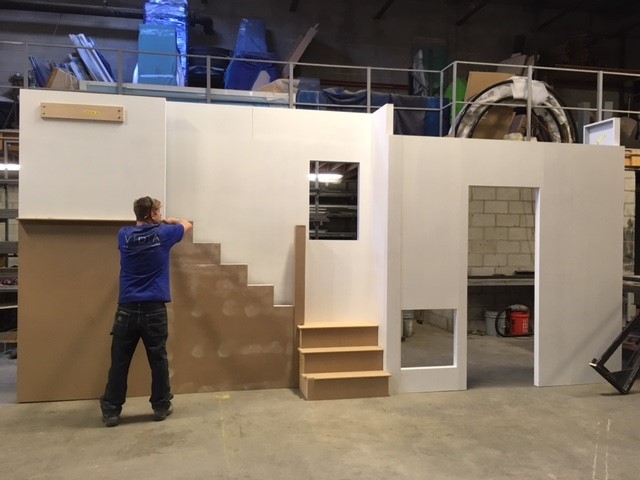 This event utilized very specific scenery tools and techniques. Our team created the wallpaper from scratch, treated it with aging and yellowing techniques, and painted the molding with thickened paint, to give the sense that the house was lived in for years and years and had been through countless paint touch-ups. The true magic was in the foreshortening – a technique which shows an object as being closer than it actually is, or as having less depth or distance. This forced perspective technique allowed us to overcome some of the space constraints in the venue and gave the illusion that the stairs to nowhere were life-sized and could carry you from one floor to the next. 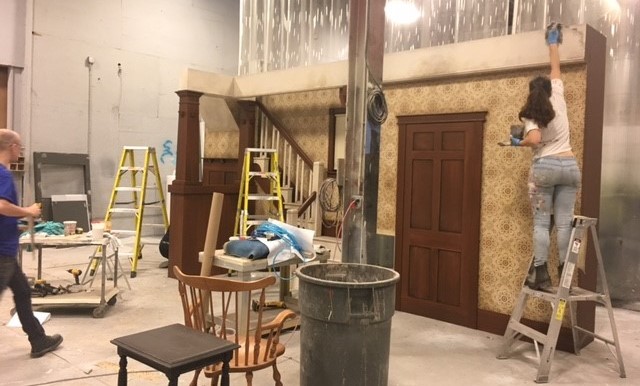 “It was really nice to be able to tell a story through the set, because that’s what it is – Archie sat in that chair, and went up and down those stairs, and touched the wallpaper, and open and closed the door,” said Jessica Atanas, Assistant Paint Shop Manager at VDA.

The participation and level of involvement extended much further beyond the various vendors and partners that brought this event to life. The Emerson College students were equally invested, writing and performing skits and acapella songs that intertwined with Lear’s shows and their theme songs. Through a partnership with The Emerson Channel, Emerson’s on-campus television network, the event was simulcast to the campuses around the globe in Los Angeles, Amsterdam, and Tokyo to name a few.

“It’s rare that I get to work on events where people are so invested and it’s so personal. There was so much emotion to this event. To see Mr. Lear, and see him walk in and be moved to tears seeing a recreation of this iconic set that he brought to life, it was amazing. He was completely blown away when he walked in and saw the set,” remarked Kim Gallagher, VDA’s Associate Director of Sales, and point person on the unveiling event. It was not just Lear’s colleagues, peers, or the President of Emerson that came out for the event, but also these young students that he’s still influencing to this day. “Everyone’s talents came together to honor an icon, and he was so appreciative, and really in awe of it.” 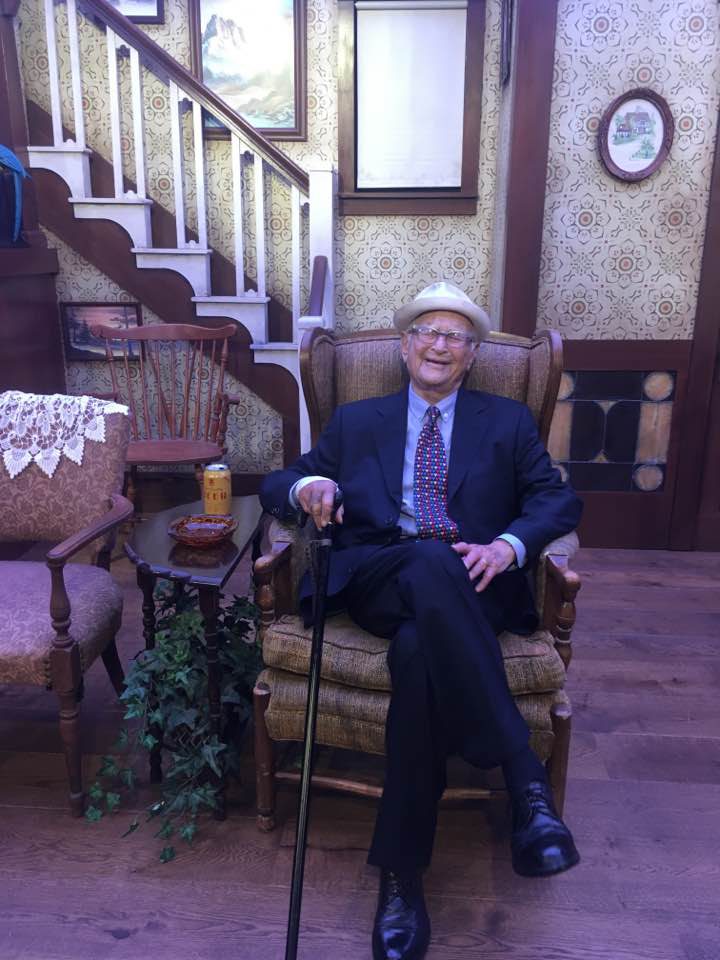 The crowning moment of the evening came when the spritely, 96-year-old Lear, lowered himself into Archie Bunker’s chair. VDA’s Executive Director of Creative and Strategy, Bob Russo, recalled how he turned to the honoree, and asked, “Mr. Lear, would you like to sit in the chair?” Norman turned, looked at the chair, and asked, “do you want me to?” to which Bob responded, “Absolutely.”

In that instant, all 200 people in the room whipped out their phones and cameras and began going click, click, click. In a flurry of photos, the audience was like paparazzi, taking photos of the guest of honor. You could have taken a photo of Norman all evening, but it was the moment he sat in that chair that everybody went, “oh my God, I need a picture of that.” That’s what it’s all about. 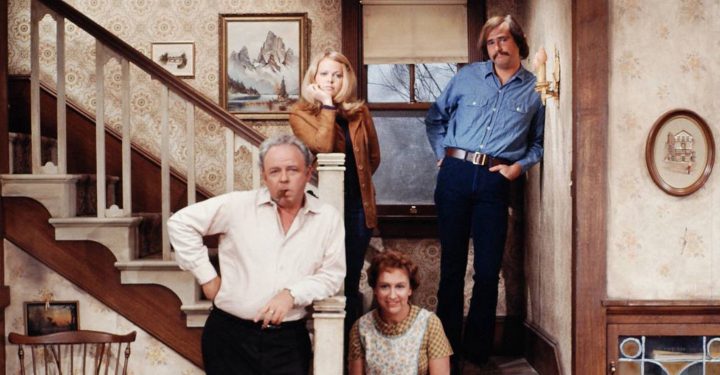 Interested to learn more about this iconic stage set or do you have questions you would like us to answer? Connect with us right now!